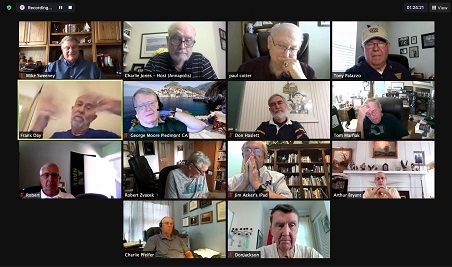 As of June 2021, the pandemic had largely faded away, so we should thank the many classmates who have joined in our Tuesday Zoom sessions, especially those who stepped up to teach us a range of interesting topics. We have done over a year of weekly Zooms with up to 35 classmates Zooming, with several classmates providing insights with professionally relevant presentations. Carl Fulford keeps us updated on Annapolis happenings and information on developments of interest to all USNA alumni. We tried to keep tabs on classmate and spouse medical issues, and in particular were often joined by Cameron Smith ’16, a young pilot with his career on hold while taking care of his wife Lauren, who has had two life-threatening cancer surgeries this past year. With his own medical issues added in, Cameron has had a rough year along with Lauren, but has received lots of support from his ’66 mentors. The 50 year Link-in-the-Chain continues!

Dr. Frank Day provided his many medical insights on the pandemic as well as diverse topics like the loss of the Scorpion, robotics and 3D printing, and social media weaponization issues. Tom Marfiak provided his expertise on China, raising issues like the 5G debate going on between China and the US on the Huawei technology. Tom Clark and others raised additional interests and issues regarding China.

Scott Redd gave us an overview of counter-terrorism (NCTC) and other aspects of his very interesting career. Tom Eubanks connected us with Al Konetzni, who joined in with his career insights on leadership and, also, his extensive experience with Cold War submarine adventures. Al also connected us with retired Navy Captain Dave Adams (Director – Navy Museums; Naval History and Heritage Command) for an enlightening session on the rail gun program and recent technology advances.

Robert Percival did an informative presentation on the complexities of Climate Change issues, focusing on the complexities of the UK plan. Our top professional engineer Charlie Johnson discussed the expert-level details of saturation diving, reminding us of our many long-forgotten technical courses at USNA. Bill Dornsife did the discussion of the TMI accident, having been a top PA government honcho on the state’s response. Bill also signed up to lead a discussion on the first submarine used in combat, The Turtle.

Ace historian Skip Stephenson delivered multiple sessions such as on the Battle of Midway, the history of Arlington Cemetery, the Doolittle Raid, and the origin of the name Shangra-La. Skip and Rufus Taylor also showed off their Army B-robes and all their special unit patches. We found out that Rufe is an expert on the Yucca Mountain nuclear waste disposal site. George Moore gave an airpower presentation with focus pre-WWII airpower aid from the Soviet Union to China. George covered the “The Red Flying Tigers” as well as Nuclear Forensics from the IAEA perspective. George also led a discussion on drone technology and discussed the Suez Canal with some photos provided by Steve Niss.

USNA dean of the School of Humanities and Social Science and senior Marine Col. Jeff Smitherman gave us an overview of academy academics, the challenges faced by current midshipmen, and current culture issues. We learned that referring to Bull Majors is considered a micro-aggression. Tom Rorick’s daughter Army Col. Elizabeth (Liz) Duque (MC) gave us an Army War College view of “Joint All Domain Warfare.” We also started early promotion of Carl McCullough’s new book published in April, “Sid and the Boys.” Captain Dave Adams gave us a presentation on “Rail Guns” that filled us in on that new technology. Jim Strouse gave us an interesting presentation on the USNA cemetery.

Jim Persels presented an interesting discussion on “end of life” legal issues and related matters as well as stimulating an additional discussion on prostate cancer management. Jim Cowardin stepped up with the details on the Battle of Lake Erie. Charlie Jones gave a presentation on nuclear energy in space, another one on Classification, and a third on Operational Security. Finally, Jim Acker took us on a virtual tour of his “Garden Train” hobby, showing us the backyard scale modeling and relatively large train engines that do all the work.

Finally, we note that John Posoli, Scott Gordon, and Charlie Jones continued in-person Thursday breakfasts in Annapolis, defying the pandemic and, also, finally getting vaccinated! As of June 2021, the Thursday in-person breakfasts were returning to normal and the pandemic was in the rearview mirror.

If interested, those classmates not yet on the Zoom email distribution list should send an email to Charlie Jones and ask to be added. Charlie also can send you a list of available recordings of these interesting presentations.